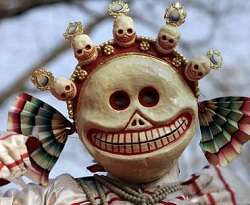 The way eyesight and the eye itself are inseparable, anger is closely tied to the ego. Your success of transforming anger and reaching higher states of awareness depends on one skill – the ability to recognize your mental patterns and calling out the egocentric behavior.

Hate to be blunt but life experience dictates that those who can recognize their own bull shit are not bothered when they smell it in others. In fact, they’ll relate better, even develop more compassion for themselves and others.

Just as a skilled pilot with full situational awareness of the buttons in the cockpit is able to effortlessly steer the plain in the right direction so will you be able to focus on much grander things in life without being tripped up much by destructive emotions.

Below is a fascinating collection of egocentric “dispositions” and my simplified explanations (feel free to disagree or expand in the comments.) If you want to become a master in anger management, I invite you to internalize these points and have them dwell in your awareness throughout the day, sounding the alarm when a wire is tripped.

Be warned though… Ego can have many faces, hides under many masks, and manifests in an infinite amount of ways. It works in a true ninja style. It is stealthy, it is cunning, it strikes when you least expect it. Not only it takes a keen sixth sense to detect its behavior, it takes courage to fess up to it. It takes real courage. Here is the list:

1. Egocentric blindness – the inclination not to notice facts or evidence which contradict our cherished beliefs or values.

Example: This is MY son. He has manners. There is no way he could have pinched Suzie in the butt in the classroom. He’s too nice to act like this.

Example: YOUR wife is messy. Why? Because you tripped on the shoe that YOU kicked off on the way to the bathroom and bumped your head against the closet door that she left opened.

Example: I am American. I don’t need to know or understand other cultures because American culture is the best. 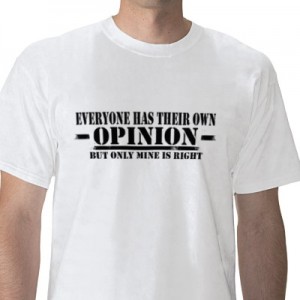 4. Egocentric self-righteousness – a delusional sense of superiority over the common masses or average person and the tendency to think that our beliefs are true because we believe them.

Example: I am Amish. I don’t need electricity and I prefer a horse buggy. Civilization is evil.

Example: I am an Islamic extremist.  My God is peaceful and merciful. I will use a sword to convince you.

6. Egocentric oversimplification – the natural tendency to ignore real and important complexities in the world in favor of simplistic notions when consideration of those complexities would require us to modify our beliefs or values.

Example: I am Pope Benedict XVI. It is Un-Christian to distribute condoms in Africa.

Example: You watch your home town Football team lose a championship.  You feel robbed of honor. Life sucks and you want to kill everyone.

8. Egocentric absurdity – the tendency to fail to notice thinking which has “absurd” consequences, when noticing them would force us to rethink our position.

Example: Your husband is the sole culprit, source of misery and your rage. If it wasn’t for his stupidity you’d be a totally happy person.

The pop psychology claims that our minds are “naturally” prone to these egocentric tendencies. However, if you follow this reasoning then you will be led to believe by the main stream psychologists that claim anger is also “normal.” I passionately disagree.

“Darkness is nothing but an absence of light” – attributed to A. Einstein but it wasn’t him. 🙂

Just because ego dominates the unenlightened mind it does not mean that ego per se is mind’s essence; very far from it. If would be like saying that dirty water is natural because it is abundant. We all know that once the impurities are removed, water becomes crystal clear, which is its true state.

My advice? Simple exercise –  develop your awareness around these dispositions and catch yourself in action. When you build awareness around your thought patterns if is easier to apply antidotes when needed.

Note to those taking offense over religion: as mentioned in the comments below, my point was not to offend any faiths. It was merely to use an example how extreme religious views can be used to justify one’s anger. When we hide our shortcomings behind religious bigotry we smear the entire spiritual tradition, be it Islam, Christianity or any other. I feel my examples are well justified as religious wars have caused more wars and violence than we care to admit. If you can stomach more, here another article you might enjoy: 8 Biblical Reasons Why Raging, Vengeful, Cruel God Needs Serious Anger Management.